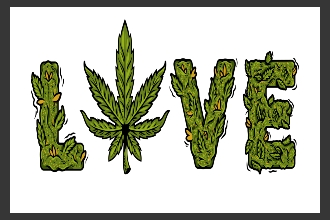 The system we know today has emerged from the hippie era and the struggle for freedom. The so-called cannabis tolerance policy or in Dutch gedoogbeleid, was introduced in 1976. It was unique at the time and the first in the world. The whole world thought we were crazy. The use of cannabis is tolerated in the Netherlands. But what does this mean now?

Now we can say that the Netherlands is indeed crazy. And I'm going to explain to you why. Firstly, there are other countries that now have a much better system, such as Canada, the US (most of the individual states), Uruguay and soon Luxembourg.

There are many other countries where cannabis is also tolerated or allowed, and preparations are being made for legalization of the green stuff. And what is the Netherlands doing in the meantime? After 44 years of cannabis tolerance, it comes with an experiment, the so-called "Weed Test". But haven't we been experimenting for 44 years? The cannabis THC policy of tolerance is nothing more than a major experiment that has been going on for almost 45 years. Back then we were at the forefront, we were the first with everything, entrepreneurial and innovative, and we showed the rest of the world how things should and could be done better. Canada is passing us by with a smile these days, soon probably the US and Luxembourg could also follow in a considerable time. Is the Netherlands a major player in the cannabis market worldwide?

The Netherlands must seize its opportunities while it still can. The Netherlands could become a formidable and even feared cannabis competitor to Canada, the US and Luxembourg in the cannabis market with products such as cannabis candy. Many Dutch companies are already settling in those countries and a lot of Dutch investments are made, simply because it is possible there and there is therefore a very favourable investment climate in those countries. All these companies are therefore not settling in the Netherlands itself and are no longer making investments in our country. The Netherlands is missing out on a lot of trade, money, and investments. Not to mention the loss of additional job opportunities and turnover at many companies such as lamp manufacturers. Also in sectors ranging from energy suppliers to science, logistics, automation & ICT, e-commerce and many other industries. And the government itself? He is missing out on a whole mountain of extra tax money. Not only the tax on the weed or hash sold, but also on the billions that are turned into this mega-industry worldwide. Our country is strong in many sectors and industries that the cannabis market desperately needs, such as:

Furthermore, we already have a large, existing gray cannabis market with an unprecedented number of highly experienced cannabis growers, a large number of coffeeshops, countless cannabis seed suppliers, a vast collection of genetics that, to this day, is even the largest collection in the world. We have had a gray market of cannabis tolerance policy for almost 50 years now and therefore build up an extensive tolerance experience. We already have all the knowledge in-house, whereas other countries do not yet have this knowledge and therefore still have to build it up. Here in the Netherlands, all we have to do is change course, and we have a hugely lucrative cannabis business.

Why not legalize cannabis?

So the Netherlands, if we legalize cannabis, then we can do what we have always been good at: trade and earn a lot of money. Say for yourself, government... Doesn't that sound good to you? I would like to say to everyone, but especially to the government: if we wait too long, the opportunities will be lost, and we will miss a golden opportunity to put the Netherlands back on the map and make it count in the world of cannabis. If we consider the cannabis markett not come to us within one to two years, we are, of course, dé founders of the cannabis tolerance policy, the big losers. Stop experimenting, we've been doing this for almost 50 years! It also costs more than enough money, so I would say: let's start earning back with cannabis! The Hague don't wait any longer and seize this golden opportunity!