WHAT IS AN OUT-OF-BODY EXPERIENCE? 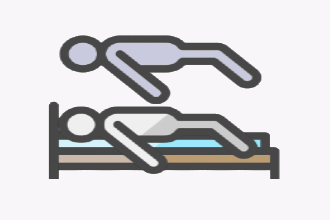 Actually, the name says it all, an out-of-body experience (abbreviated OBE) is an experience in which body and mind come apart. A fascinating and astonishing phenomenon that can evoke various emotions. From frightening to liberating and enlightening. An OBE can occur spontaneously or supposedly be induced. In this article we explain what an OBE is, how it arises and what the relationship is with psychedelics, such as Ayahuasca, DMT and LSD.

How does an OBE feel?

An Out- Of-Body experience feels different for everyone. It is therefore difficult to describe exactly what it means. It can feel like your body is different than it actually is. For example, when someone is lying on their back and looking at their feet, they seem extremely far away or super close. With this experience, your body and mind still feel connected, it's just different.

The experience of literally feeling your mind leaving your body and only being connected by a thin, silver thread is where the name OBE comes from. From above, a person observes his own body, the environment and even the universe of which he is a part. This sounds like a frightening experience, but it is precisely described as peaceful. A kind of confirmation that we are all part of a greater whole and only consist of love and potential. Although the exact experience is difficult to describe, an OBE usually includes the following phenomena:

That it is a phenomenon that takes place in higher spheres is certain. Hence, it is often related to spirituality. However, this does not have to be the case, an OBE can also arise spontaneously.

An induced OBE is deliberately evoked by the person. A spontaneous OBE arises unexpectedly and therefore spontaneously.

An induced OBE is deliberately invoked by the person himself. This can be done, for example, through meditation, breathing exercises, self-hypnosis or the use of psychedelic drugs such as Ayahuasca, DMT and LSD. In general, your brain makes you literally “down-to-earth” stays. With both feet on the ground, where you are busy living your daily life. A violent event or simply another state of being, such as sleep, can change this. A spontaneous OBE can arise during:

Sleep
Have you ever felt like you were falling, while you were just safely lying in your bed? This is probably the most common and thus well-known OBE. This often happens just before you actually fall asleep and can sometimes be related to periods of stress or anxiety about a future event. The OBE itself is short, you wake up startled.

Hard Physical Exercise
When your body engages in a very strenuous exercise, such as a marathon or threatening situation, it can feel like your mind is stepping or has stepped outside of your body. Your legs move automatically or everything goes in slow motion.

Disorder
An OBE is also experienced by people with a serious condition in the brain, such as migraine or epilepsy. Where environmental factors such as light and sound are so intense that they are unbearable. In the case of an epileptic seizure, it is even possible for a person to see himself or herself lying on the floor.

Near-death experience
This is the most violent spontaneous OBE and the experiences are very diverse. From the well-known example of seeing a light tunnel to viewing an operation from above. It is a well-known phenomenon that psychedelic drugs can induce hallucinations and visions. However, an OBE is a less well-known phenomenon of use and is also less common. When an experience can be labeled as a real OBE is somewhat unclear. Users of the strong brew Ayahuasca described that they could fly and saw the world through the eyes of an eagle. At that moment body and mind are separated, and the mind is even present in another being.

The active alkali in Ayahuasca is DMT, which is also known as the spiritual molecule. Not only DMT, but also the psychoactive substance Mescaline (from mescaline cacti) is known for creating of enriching spiritual events, of which an OBE can be a part. These are strong and perhaps exceptional examples. It is not for nothing that the strong psychoactive substances mescaline and DMT are mainly used during sacred rituals and under the guidance of experienced shamans.</ p>

During the use of psychedelics, users often talk about seeing geometric tunnels, strong visual patterns and the emergence of uncontrollable emotions. These cannot necessarily be called OBE experiences, but they do go beyond the control of the conscious brain. In that sense, too, body and mind are briefly separated from each other. The intensity of an Out-Of-Body experience can vary greatly and may or may not be life-changing. It can be said with certainty that it is a very interesting phenomenon that not only appears in the spiritual circles, but can also arise spontaneously.