WHAT IS LAUGHING GAS? 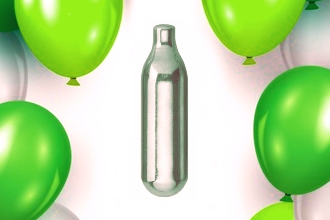 Di-nitrogen monoxide (N2O) is better known as laughing gas. In the hospital it is used to give the patient a sedative and in the party scene to party with it. As a party goer it gives you a short-lived intoxication, think of 1 to 5 minutes. It makes you light-headed and gives you a relaxing and euphoric feeling. Image and sound can enter differently, and you can see and hear things that may not be there. Nevertheless, it is an interesting drug within the range.

What is nitrous oxide, and what is it used for?

Laughing gas is a colorless and odorless substance. When inhaled, the gas slows the reaction time of the body. This results in a calm, euphoric feeling. Laughing gas can be used to treat pain. It also works as a light sedative. That is why it is sometimes used before dental procedures to promote relaxation and reduce anxiety. Nitrous oxide works quickly as a sedative, but it doesn't take long for the effects to wear off. Laughing gas is safe. But as with any type of drug, side effects can occur. Here's an overview of the possible side effects of nitrous oxide.

When inhaled directly from tanks or whippets (nitrous oxide capsules), the gas is intensely cold (-40 °C) and can cause frostbite of the nose, lips and throat (including the vocal cords). Since the gas is also under constant pressure, it can cause ruptures in lung tissue when inhaled directly from tanks or capsules. Releasing nitrous oxide into a balloon helps warm the gas and normalize the pressure before you inhale it. People can also injure themselves if they use faulty gas dispensers, which can even explode in the worst case. Successively dispensing several gas cylinders with één cracker(a handheld device used to 'crack' a nitrous oxide capsule/whippet) can also cause cold burns to the hands. There is currently no evidence to show that mixing nitrous oxide with other stimulants increases health risks. Despite this, however, it is possible that combining the gas with stimulants and other drugs can put additional pressure on the heart, raise blood pressure and interfere with the heart rate. Anecdotal evidence suggests that combining nitrous oxide with other substances such as cannabis, ketamine, LSD, magic mushrooms and salvia can cause intense dissociation. Dinitrogen monoxide is legal and can therefore just be sold and used. It is available everywhere because it has many uses. For example, nitrous oxide is frequently used in the kitchen (restaurants) by means of whipped cream cartridges for making foams, whipped cream or cream knives. In recent years, the use of nitrous oxide as a recreational or party drug has become increasingly popular. As a recreational drug, nitrous oxide is already the seventh most-used recreational drug in the world, according to a global survey, the Global Drug Survey, which is administered to tens of thousands of recreational users each year via the Internet. Nitrous oxide is much safer than other drugs, but despite this, the increasing consumption of this substance is becoming more and more of a concern in some countries where nitrous oxide has recently become extremely popular: the Netherlands, United Kingdom, Germany... Currently, it is mainly used in Spain consumed at festivals and tourist spots, such as Ibiza and the Costa del Sol, not so much by the Spaniards themselves, but mainly by partying tourists. Use a whipped cream pattern for what it is meant for and if you want to try a drug check the natural psychedelics we offer. We know for sure that sensible use will not cause any harm. Be careful!