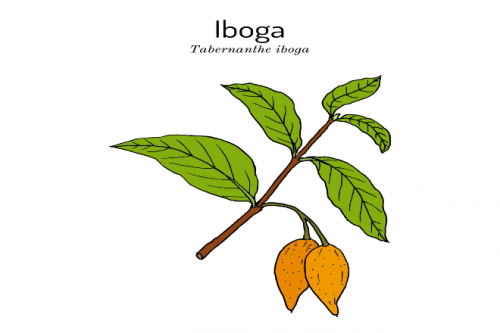 Ibogaïne, a plant-based and psychedelic drug that was used in the past to help addicts of heroin, among other things. There are still many questions and uncertainties about this powerful herb today. The medical community is not yet in full agreement about the possible medicinal properties, and Ibogaïne is therefore not registered as a medicine. But what is Ibogaïne then wél and what kind of effects does it have? You can read all about it in this article.

The Iboga, officially called Tabernanthe Iboga, is a shrub that grows in western Central Africa. Mainly in Gabon and adjacent parts of Congo and Cameroon. The Iboga plant is an evergreen flowering shrub with white and pink flowers, and orange colored fruit. Under the right conditions, the shrub can grow into a tree of no less than 10 meters high.

The official name of the Iboga, the Tabernanthe Iboga, comes from Latin. Taberna means hut or stable. Anthe means flower. The second part, Iboga, is the Congolese name for the shrub. The magic of the Iboga plant can be found in the root bark: this contains Ibogaïne. This is a natural substance extracted from the Iboga that is used as hallucinogenic drugs and could be used as a medicine against addiction. The rich history of Ibogaïne

It is known from history that Ibogaïne was first used by inhabitants of Gabon, a country in Africa. Here, the Iboga plant has played an important role for the indigenous Bwiti religion for many generations. As far as we know, the drug has been used here for more than 5,000 years to achieve spiritual maturity. For this, they take a very strong dose of Iboga, and then they experience an intense, mind-altering experience.

A lower dose of Ibogaïne is taken during weekly ceremonies, and then they experience intense love and mutual understanding as they continue dancing and drumming into the late night. With the Iboga rituals, the indigenous people feel a connection with the divine realm, and it gives them insight into the life cycle, death and rebirth. The substance Ibogaïne is used in two different situations: as hallucinogenic drugs and as a medicine against addictions. The substance is not registered in the Netherlands and therefore doesn´t fall under the Medicines Act. This means that there are no thorough studies into the effects and risks.

The substance Ibogaïne is mainly used to experience psychedelic effects. Users like to take the drug to take a journey and step out of their subconscious. The effects of Ibogaïne are very strong, just like ayahuasca. It is a very powerful trip tool, where it is difficult to predict what you will encounter during your trip. Fears, demons or just the nice dreams, you don't know exactly what the proceeds of the trip will be. In addition to its psychedelic effect, the drug Ibogaïne also has other unique properties. For example, it is possible to use it as a medicine against addictions. Among other things, it could help with addictions to opiates, cocaine, nicotine, alcohol and amphetamine.

Almost no proper research has been done on this. The only research with clear results, unfortunately, does not have a good research design. As a result, the results are not reliable, but they can give a good indication. This concerns a study in which 33 people started drug addiction with the help of Ibogaïne. 25 of those individuals had no withdrawal symptoms and the desire to use decreased.

In addition, several small studies have been carried out into Ibogaïne and addiction, but even in these cases the research designs are not always correct. In general, the stories are positive, but the use of Ibogaïne is certainly not without danger. Although the substance has unique properties, a lot of research is still needed to determine whether Ibogaïne can actually be used as a medicine.