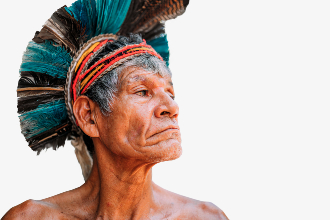 Ayahuasca is one of the most famous herbal mixtures from the Amazon. The effects are very powerful and the use goes back centuries. Because of the sometimes life-changing effects, it is certainly not suitable for a relaxed evening with friends. In this article we would like to explain to you what Ayahuasca is, what the effects are and how the herbal mixture with a sacred status is used.

Ayahuasca is a very powerful tea

Ayahuasca consists of two ingredients from the Amazon rainforest: the Banisteriopsis Caapi vine and the leaves of the Psychotria Viridis plant. A brew is made from both, which has to boil for hours. Eventually a brown-red, thick substance is formed which is drunk as tea and known as Ayahuasca!

The active ingredients are DMT (dimethyltryptamine), harmine and harmaline. DMT is the strongest psychoactive substance found on Earth to date and can, to put it mildly, strongly influence perception. The effects are very potent and comparable to LSD, mushrooms a and other psychoactive substances. Harmine and harmaline are MAOIs, which enhance and prolong the effects of the DMT.

The enzyme MonoAmino-Oxidase is responsible for breaking down the important neurotransmitters serotonin and dopamine. These neurotransmitters directly influence our thoughts and thus our behavior. An MAO inhibitor ensures that this process of degradation is greatly slowed down and that the neurotransmitters stimulated by the DMT remain active for a longer period of time. A very powerful combination! The taste of the hallucinogenic drink is very bitter and the physical side effects are not always pleasant. A nickname for Ayahuasca is ‘la purga’, which in Spanish means ‘purification’ means. This name refers to the purifying effect for both body and mind. The exact effect of Ayahuasca tea differs per person, but users indicate the effects below. The physical side effects are seen as very normal and are part of the purification ritual. It's just not pleasant per se. The mental effects you can achieve by drinking Ayahuascca are impressive and overwhelming to say the least. Visual hallucinations are very likely, where you may have the feeling of traveling at high speed through endless tunnels of geometric patterns. The trip can develop further in experiencing visions, mystical or spiritual revelations and experiencing experiences from your present or past lives.

During the use of Ayahuasca, it is possible that new connections are created in the brain, which can serve as a way out, especially for people with severe depression. This is not a proven theory, but the effect of psychedelics in depression is extensively researched and has also shown positive results. Depending on the dose, an Ayahuasca trip lasts between 4 and 8 hours.

Because of the strong physical and mental effects of Ayahuasca, its use in the form of ceremonies is done under the professional guidance of experienced shamans. This is an educated, sober person who guides you through the inconveniences of the trip and then takes you by the hand during a possibly life-changing, spiritual journey.

Traditionally, the shamans have to undergo a long training before they can accompany an Ayahuasca journey. This is because there is a high level of responsibility involved. A lot comes up during a group ceremony, euphoric states, but unprocessed trauma can also show itself in all its intensity. It is the shaman's job to provide highly expert guidance at such times. In October 2019, the Supreme Court ruled that the use of Ayahuasca is officially prohibited in the Netherlands. That means you are not allowed to own, distribute or produce it. There has been doubt about this for a long time, because the use of the hallucinogenic tea in exceptional cases falls under the freedom of religion. The gift of Ayahuasca has long been a big part of religious ceremonies.

However, the popularity of Ayahuasca increased enormously and there was a proliferation of ayahuasca centers. Often untrained supervisors are required, making its use very dangerous for both the mental and physical health of the participants. The ban was therefore also introduced under the guise of protecting the Dutch population. Many ayahuasca centers have switched to psilohuasca after the ban, which is a combination of psilocybin (the psychoactive substance in magic mushrooms and truffles) and MAO inhibitors. With similar effects and risks as Ayahuasca.