THESE FUNGI CAUSE FUNGAL INFECTION ON YOUR MUSHROOMS GROWING KIT 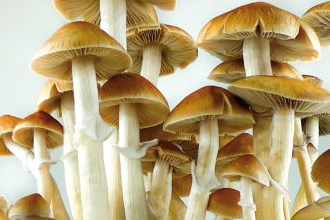 Do you see strange colors and textures on your mushroom grow kit? It is possible that you are suffering from a fungal contamination on the substrate or the mushrooms. The substrate in which your magic mushrooms grow so well is also an attractive breeding ground for other fungi. But once you suffer from such an infection, it can cause annoying problems.

Unfortunately, a fungal infection can pose a real threat to your magic mushroom grow kit. If there is a fungus in or on the mycelium in the germination phase, it can prevent the mushrooms from growing. During the fruit-forming phase, an infestation can cause the mushrooms to drop their caps. It is therefore important to intervene quickly if there is a mold contamination.

Help! I see fungi on my grow kit!

When you see strange colors on your mushroom grow kit, you might lose heart. This is a clear sign of an infection. However, if you act quickly, you may still be able to save your magic mushrooms. It is therefore important to keep a close eye on the mycelium and your mushrooms.

Watch out for discolouration, such as green, gray or black spots. These indicate fungi. Unfortunately, some fungi are not very visible. They fall off against the mycelium because they are too small or have the same color. To observe them, you need a microscope. Another sign that you have a fungus is a dusty layer that looks like some kind of powder. This is also not visible with the naked eye, but can be seen with a magnifying glass. Below, you can read more about fungi that can potentially contaminate your magic mushroom grow kit.

The most common fungi

Aspergillus (Black Mold and other colours)

Aspergillus molds are common, and some species are even poisonous. The toxins they produce can also affect humans and animals harmful. They are carcinogenic and can damage the liver. Aspergillus prefers an environment with a neutral or slightly basic pH. An infestation is easy to overlook, because some types of mold are light gray. However, they can also be black, yellow, green, blue or brown. Because of the toxic substances, you will have to dispose of a contaminated grow kit with care. This fungus with a complicated name, you can recognize it by the fact that it first colors the mycelium white. In a short time, it will cover the entire grow kit and your magic mushrooms. The green fungus causes soft rot and then produces green spores. In general, the cause of the occurrence of Trichoderma Harzianum lies in unhygienic working, anaerobic conditions in the grow kit (too little oxygen) and flies. To combat this fungus, you should always clean everything well, both the surfaces and your tools.

Contamination with the Verticillium fungus causes the wilt. When your mushrooms get infected with this fungus, you'll see deformed caps (if the infestation occurs early in development) or a strange growth with tilted caps. Verticillium produces sticky spores that spread easily through dust particles.

Neurospora (also called pink fungus or red bread fungus) is common in nature and also in artificial nutrient media. That is one of the reasons that it is also widely used in biology. It grows very fast and takes only a short time to spread. He is also not easily stopped, so mushrooms spores know how to get through cotton stoppers and filters. Neurospora is a fungus commonly found on grains and agar. Once you have an infection, it is not easy to get rid of. In general, if you have pink mold, you should destroy the contaminated grow kit and thoroughly clean your entire work environment. Mildew is one of the most common infections. This fungus grows very quickly and can cover the entire grow kit within two days. It looks like cobwebs (which is also a commonly used name) and causes rot in the mushrooms. Mildew is difficult to spot in the early stages, because the color resembles that of the mycelium. Mildew likes high humidity very much, so you want To combat this fungus, you need to lower the humidity as soon as possible. Increasing air circulation can also help.

There are many different fungi that have a blue-green color, often they are from the Penicillium family. They are common on mushrooms and the spores float through the air everywhere. That way they also end up on your grow kit where they contaminate the substrate. Initially, the color is white, so you don't see an infection so quickly. You can probably smell a Penicillium contamination as well: the grow kit gets a stale moldy smell.

As you can see, a fungal contamination in your magic mushroom grow kit can cause quite a few problems. It can be difficult to get rid of the fungi. Although in some cases you can still save your magic mushrooms after a fungal infection in the grow kit, prevention is of course better than cure. So read here more about what to watch out for in the event of an infection and how to prevent it.